All Fibroids are not Equal 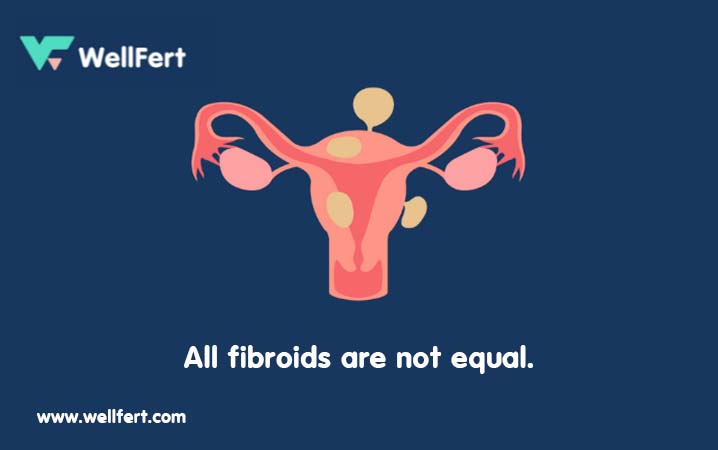 All Fibroids are not Equal

Have you been diagnosed with fibroids and trying to get pregnant?

Fibroids! This may just be one of the commonest conditions women face when it comes to struggles with their infertility. No woman wants to hear that she has a fibroid, yet sadly many do, and a large fraction of those who do have difficulty getting pregnant, even after medical intervention. Let’s give a quick definition. What are fibroids?

Fibroids or uterine fibroids are benign (or noncancerous) growths of the womb that usually appear during the childbearing phase of a woman’s life.

[Fun fact: Another name for fibroids is leiomyomas (pronounced as lie-o-my-oh-muh)]

Fibroids can grow as a single nodule or as a cluster. They can be as tiny as little seeds or become as large as a watermelon. In some very extreme scenarios, they grow and expand the uterus, and sometimes appear as a pregnancy. The way fibroids grow vary from woman to woman – sometimes slow, and at other times rapid.

Fibroids can be harmless, but they can also cause discomfort and lead to a drop in red blood cells (anemia), which can cause fatigue from heavy blood loss, and in very rare cases, a blood transfusion is needed due to blood loss.

What are the signs to watch out for, or indicators that may point to the presence of a fibroid?

The truth is, many women have fibroids at different points in their lives and they may not know until a routine pelvic examination or a prenatal ultrasound scan. This is because many of them cause no symptoms. In some cases, the fibroid may cause serious symptoms that lead to their incidental discovery. The symptoms can arise as a result of their location, size and number.

[Good news! They are usually not associated with risks of cancer and most likely will not develop into cancer.]

Any of the above-mentioned symptoms should not be ignored.

[Did you know: Sometimes, a fibroid can cause acute pain when it outgrows its blood supply, and begins to die]

Truly, all fibroids are not equal.

Not all fibroids are equal. There are different types of fibroid. Like we mentioned earlier, some are big, some are small. Some are within the womb, in the muscular walls of the womb or right on top of the womb. Let’s share their medical names with you:

Some of these names may ring a bell if you have been diagnosed with fibroid.

What causes fibroids? Question of the millennium! Truly, doctors don’t know the exact cause of uterine fibroids, but based on research and clinical experience, the following factors could be considered in a fibroid case:

[FYI: After menopause, fibroids tend to shrink due to a decrease in hormone production]

Fibroids usually don’t interfere with conception. Many women get pregnant even with the presence of a fibroid in the uterine cavity, however, these women are usually advised to take extra precautions during their pregnancy and report to their antenatal care provider the moment they feel something is wrong, because a fibroid in the same space with a growing foetus can increase the risk of pregnancy complications, such as preterm delivery, growth restriction of the foetus or even placental abruption.

It is however possible that fibroids — especially submucosal fibroids — lead to infertility or pregnancy loss, and in this case, the intervention of a fertility specialist is necessary if a couple desires to give another shot at conception.

Can they be prevented?

Well, there is little scientific evidence regarding how to prevent fibroids. It may not be possible, but the truth is, only a percentage of these growths require invasive treatment.

Nothing trumps making healthy lifestyle choices. By maintaining a healthy weight, eating fibre and green vegetables often, you are very likely to decrease your risk of having fibroid.

The WellFert community is here to help you through your journey. Visit our website for more information, reach out to us on Social Media @Wellfert on Facebook, Instagram and LinkedIn